Best Places To Visit In Portugal

Portugal Vacation - Explore Portugal easily at your own pace

Portugal is one of Europe's oldest nations and has set up its current continental frontier since 1297. Portugal is perfectly placed between the Atlantic Ocean and Spain, on the Iberian Peninsula's west side. Its proximity to the Atlantic coastline is the main reason Portugal became a sea-going country that leads to great adventures and discoveries over the centuries.

Portugal's sunny climate and geographical features have attracted many visitors, who will find many up-to-date tourist features along with quaint accommodations with a personal touch.

The enchanting capital Lisbon runs along the Tagus banks. Various cultures have impacted the historic city over time and still maintain a village feel. A walk through Baxia's district Pombaline grid streets leads to the Tagus in Praça do Comércio, medieval quarters, monuments along with modern public places like Parque das Nações. Seagulls take flight from the harbor, where trawlers from Africa unload their freight. Pigeons sweep down on Praca do Comercio, also known as Black Horse Square.

From the Bairro Alto (Upper City), cable cars carry Lisbon's denizens down to the waterfront. The sidewalks are characteristic black-and-white mosaics

forming arabesques. Streets bear colorful names or designations, such as Rua do Acucar (Street of Sugar). Fountains abound: one, the Samaritan, dates from the 16th century. The boulevards split through the city to new high-rise apartment houses, whereas in other quarters laundry hanging from 18th-century houses flaps in the wind.

The remnants of successive cultures are one of the first surprises awaiting visitors to the Alentejo Region. These cultures include cromlechs and dolmens, Arab and Roman vestiges intertwined with the more recent Christian structures and the vast plane is punctuated by a number of medieval castles. Beautiful towns and villages are located in the northeast from the Rota dos Castelos (Castle Route) including Portalegre, Marvão, Nisa, Castelo de Vide and Alter do Chão. The climate warms up further south and the terrain becomes flattered in places like Évora (Portugal's most beautiful town), Vila Viçosa, Estremoz, Monsaraz, and Arraiolos (famous for 17th and 18th- 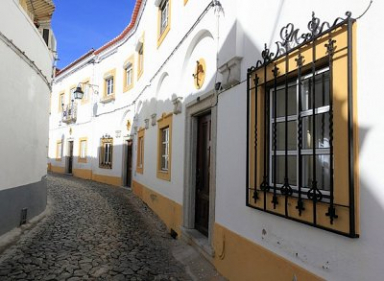 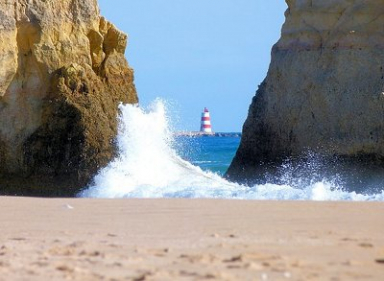 A trip to Algarve would have been challenging during the 13th century, but modern highways eliminate this problem and there is also Faro International Airport. The perfect temperatures in this charming area are ideal for beach goers and golfers. To the north of Algarve, the mountains of Caldeirao, Espinhaco de Cao, and Monchique protect the coast from powerful winds. This fertile and verdant area is full of festive colored vegetation from orange groves, fig trees, and blossoming almond trees. Sandy beaches stretch along the southern coastline, with the intermittent amazing grottoes and rugged red cliffs.

Center - Land Of Many Contrasts

Also known as 'Beiras' is an area that runs north of the Tagus River and south of the Douro River. Many contrasts exist here: The mountainous interior is contrasted by a temperate Atlantic coastline with white sandy beaches and pine forests. The highest mountain range in continental Portugal is the Estrela Mountain Range (Serra da Estrela). The Mondego River rises here and then runs down to the City of Coimbra. This river, with many odes composed for it, runs into the Atlantic ocean via the long beach Figueira da Foz.

This area is blessed with healing waters that help towns like Luso and Curia to spring up. The natural landscape includes Mountain slopes covered with ancient forests that include the Bucao woodlands. UNESCO has acknowledged the heritage sites like the convents, monasteries, churches and castles of the area. Historic villages and towns form part of the inland area and some of them are guarded by castles built by previous kings of Portugal.

High-quality museum collections can be found in larger towns like Castelo Branco, Viseu, Coimbra, Aveiro, and Guarda. Traditional arts and crafts like glass blowing and ceramics are popular in the coastal areas, while the inland artisans usually work with linen weaving, iron, clay and black clay. 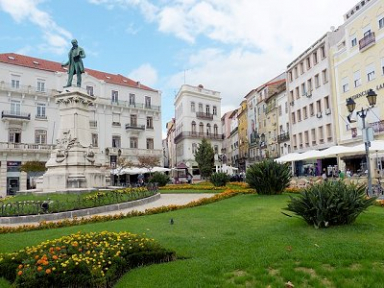 The Coastal Region of Minho

In northern Portugal, Porto is the most popular city, which received its name from Portugal and from the famous wine. Visitors get to experience the ‘zona ribeirinha’ on the waterside along with the lively downtown areas. Traditional values are still intact, but there is also a movement towards modernizing commercial and industrial areas.

Valença is linked to Vila do Conde via the coastal road running north of Porto. Along with this road, visitors will see summer resorts, beaches and enchanting villages like Vila Nova de Cerveira and Caminha.

The famous and unique wine is made in the Douro region, but other attractions include the Douro River, northern Portugal's longest river. The river winds through cliffs and mountains until it flows via Porto into the Atlantic. Traditional dance and songs like the Pauliteiros dance that has strong Celtic influences are kept alive in the North East Region of Tras-os-Montes. Traditional possessions and festivals also display how

Christian values were superimposed onto an older pagan heritage. The area features unspoiled natural landscape and is ideal for canoeing, mountain trekking or having a relaxing spa in towns like Pedras Salgadas, Chaves and Carvalhelhos.

More Than 185 Classic Mediterranean-Style Recipes of the Azores, Madeira and Continental Portugal 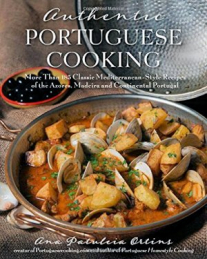 Ana Patuleia Ortins will help you travel to and experience the unique paradise of Portugal without setting foot on a plane. Portugal is known for its cuisine that while mild in spice, is rich in flavor. As the authority on Portuguese cooking, Ana highlights the fare through an encyclopedic look into her family's cooking and the country's history.

Embrace the flavors of Portugal and learn how to make all parts of a true Portuguese meal, from meats such as Madeiran Wine and Garlic Beef Kabobs, Mushroom-Stuffed Pork Tenderloin with Pomegranate Sauce and Saint Martin's Grilled Salt Cod with Potatoes, to sides of Sautéed Kale with Pine Nuts and Onions and homemade bread. Ana's step-by-step guides to preparing and cooking present easy-to-follow methods for the most delicious results!

Discover why Portugal should be on every foodie's list of places to visit, even if it's in your own kitchen!


A very well organised tour which proved to be very achievable. The drive tour gave us plenty of flexibility and we were able to make many detours to places and sights along the way.

We are most satisfied with the service you provided especially with the short time frame we gave you to organise all the accommodation and the car. If ever we are going to visit europe again we would hesitate to use your services. We have nohesitation in recommending you to friends and family.